In the fall our girls were very busy working on their Key to Brownies as well as their Key to me. Now that we are back from the break we are going to be working on the "Key to the Arts." This is one of my favourite keys to do with the girls because there is literally SO MUCH fun stuff you can do!


Our girls are super creative and are always up for crafts and dances. In our first meeting back in our meeting space we decided we would introduce the new key and work on one of my favourite interest badges to do altogether - Puppet Play! 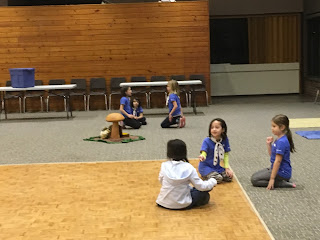 First things first we wanted to review our fairy circle routine. We were in the big room today because our usual space in the church was being used for another function. Our girls have gotten really good at taking attendance and dues before coming together for our group opening. I'm super proud of the progress they've made since September.

After opening we explained what the new key was and all of the girls were super excited! We jumped right into the first stage of puppet making - painting wooden spoons for our spoon puppets. We do this right away so the spoons have enough time to dry while we do some other activities.


Once the spoons were painted I took the girls over to take a look at some different puppets. I have a background in puppeteering so was able to bring in hand puppets, finger puppets, marionettes and hand and rod puppets.

After looking at the different kinds each girl got to take a puppet and try out different ways to work with them. First they paired up and tried having their puppets communicate with each other. Then we did an exercise where they walk around the room and try out different emotions with the puppets. " Show me how your puppet would show that they were happy. How about if they were scared. Excited?" Unfortunately I didn't get any picture of this because we were running around so much! 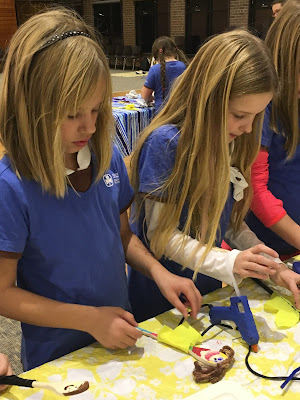 Once the spoons were dry the girls got to pull out all the bits and bobs from the craft cupboard and use their imagination to make a puppet. We had a snowy owl puppet, butterfly, grandmother and various people. Before the girls painted their puppets they decided on a short story to do in their fairy circles. They split up roles and each girl made her puppet to match the role they would play later.

I still am so proud of how good they are with glue guns. We've come a long way with this skill :)

Once the puppets were completed it was time to get ready for the show! Working in their groups the girls drew out a scene for their puppet show. We attached this scene to a table that was laid on its side. Then the girls hid behind the table and were able to perform their show without being seen.

Our parents came for pick up a little early so they could come and see the puppet shows. All of the girls performed beautifully.What a wonderful way to start off a new part of the program!