Tour of the Girl Guide Archives

This week our girls had a special opportunity to visit the Girl Guides of Ontario Archives. Our regular meeting space is down the street from the Archives so with a quick phone call to the Archivist Katey and a little bit of planning we were able to set up the event for the girls.

We met at the Ontario Council location and met our three wonderful volunteers who were to be our tour guides. They joined us for our Brownie Opening and then we split our group in half, one group toured the archives first and the other worked on activities from the heritage box. after 45min we switched.

My group went to the archives first. The girls had never been to the Ontario Council office before and were very impressed with the colourful, kid friendly space. 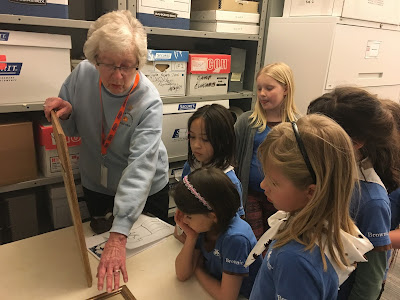 The first thing our volunteers showed the girls were pictures of lord and lady Baden Powell. I was very impressed that the girls remembered all about who these important people are and how the whole guiding movement began.

After learning about the Baden Powells the Brownies were shown various vintage uniforms. They were really impressed with the white and blue Rosebud dresses and really liked the brown dress uniform with the Brownie dues pouch and Beret. Many of them wondered why we don't still wear dresses.

After looking at uniforms though the ages we went to look at some of the old print publications. The girls learned about the history of cookie selling and looked at cookie boxes from the last 100 years! 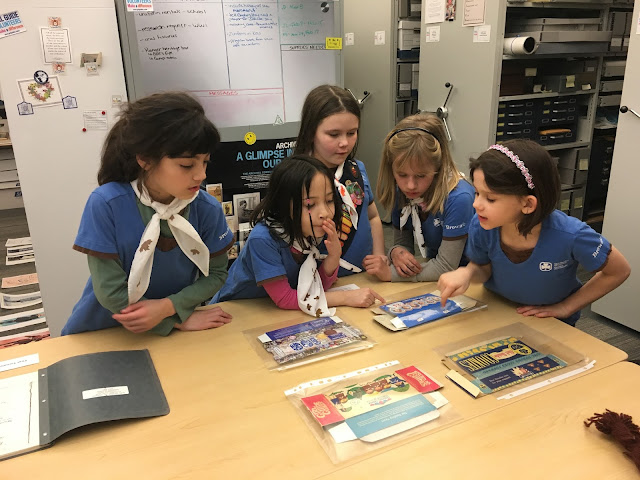 As a special treat the girls got to learn about the Sea Rangers. They even had some hats for us to try on!

Have you heard of Aggie? In the Willow Bluffs district an Aggie (Spring Festival) was held every year for its senior branches. A great feature of this event was a life-sized doll (named Aggie after Agnes Baden Powell) that was brought to each festival dressed in that year's theme (space, aloha, etc). The girls fell in love with the Aggie Doll and got some great photos with her.

After my group had finished in the Archives we moved to the main meeting space and got to do some activities from our Provincial heritage boxes. The girls got to learn all about the old Brownie Interest badges by playing BINGO, played bean bag games and played a memory game that featured all sort of historical girl guide events.

Once both groups were back together Breanna shared about her week with our Brownie Dolls and sand our closing song. 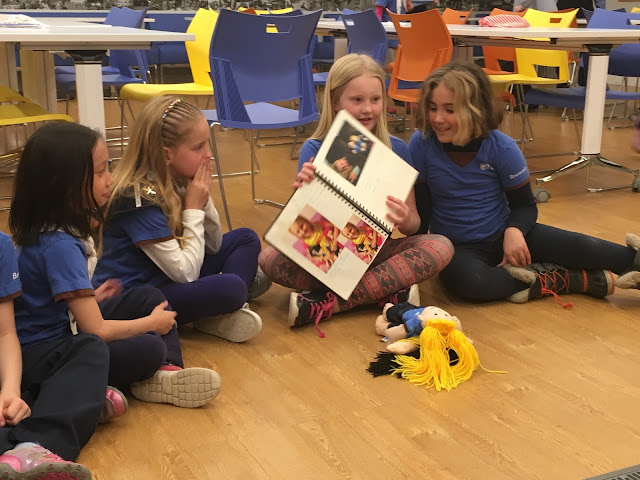 What a great meeting at the Archives!
Posted by rcsadler at 08:28