Our Brownies love being outside, so when Ontario council posted their plans to host an Outdoor Activity Day it didn't take long for Pink Owl to bring the event to to girls and see who was interested. This activity day was sponsored by Ontario Council and took place on the same day in various cities across the province. Since our unit is located in Toronto our outdoor activity day too place at Downsview Park at the Discovery centre! 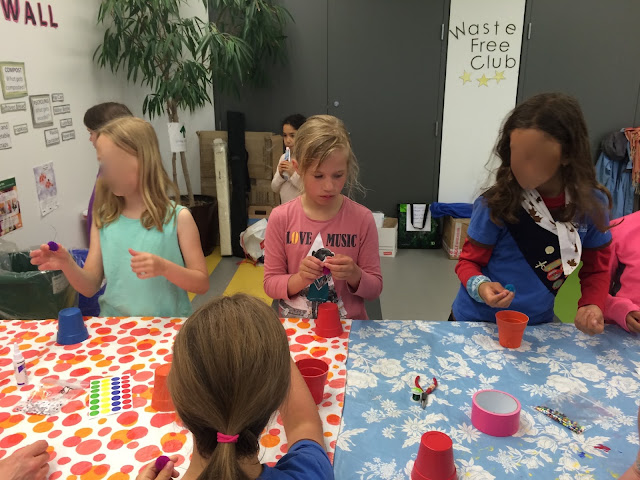 On the days leading up to the event we were all a little worried. The weather forecast predicted cold temperatures and rain All. Day. Long. But never fear as our Brownies came dressed for the weather and we had a fantastic time despite a little water. The first set of activities included forest games outside and then some crafts inside.The girls made nature necklaces and decorated plant pots which they later planted spruce saplings in.  My Brownie unit was paired with another unit from the East end of the city (Yay new friends) and we had a great time exploring the outdoors together all day.


After craft time it was time for lunch. We got to eat will all of the groups attending the event so it was a wonderful time to network with other guides and pathfinder leaders. Once lunch was finished we took part in the "Creepy Crawly" program hosted by the Discovery Centre. We were so fortunate to have Janelle, the outdoor education facilitator with us all afternoon as she was an amazing resource. She was able to answer all of the girls questions and taught them all about reptiles, amphibians, bees, insects and local plant & wildlife.

The first thing the girl's learned about was the different between reptiles and amphibians. They learned about turtles and discovered that a turtle's shell is actually part of the turtle and it cannot be removed. They even got a visit from the centre's pet garter snake "Socks" which they were encouraged to hold and pet.

After Socks was safely back in his cage it was time for the girls to get outside. Luckily by this point in the day the rain had stopped and although it was still gray the girls were eager to explore the forest.

The first stop on our hike was the Discovery Centre’s bee farm In addition to being an outdoor education centre this area of Downsview Park is also a fully operational farm. The girls had seen the green houses and vegetable patches earlier in the day but for many this was their first time seeing a bee farm. We learned about how bees are some of the best pollinators around and how many of the fruits and vegetables the girls love to eat wouldn’t be possible if not for the bee.  Some of the girls who were originally scared of the idea of being close to the bee farm seemed to relax when they discovered that bees are more helpful then harmful.

After the bee farm Janelle lead us into the forest to look at some fallen logs. She talked about the Emerald Ash Borer Beetle and talked with the girls about what and invasive species is and why they can be so troublesome.

By this time the girls had noticed all of the snails roaming around on the ground and were fiercely collecting as many as they could.  Lucky for them we were doing the Creepy Crawly program so the next activity was creating snail houses. The girls LOVED this activity and worked hard for over 20min making dwellings for their snails. In the end we had snail houses, apartments, parks and condos!


The girls were having so much fun with their snails that they didn’t want to leave! However we had so much more of our program to explore that with a little convincing we found a safe place for them and moved along the trail. Janelle taught us abuot the difference between a bug and an insect and then showed the girls how to roll logs for find the creepy crawlies living underneath. Armed with magnifying glasses and viewing containers the girls set out to find some insects. They found worms, beetles, slugs, centipedes and of course, more snails.


Along the rest of our hike the girls worked in pairs on nature BINGO. They found all sorts of interesting things including trees with fuzzy bark, bug homes inside of plant stocks and even baby robins in a nest!


We had such a wonderful day at Downsview Park and the 401st Toronto Brownies will definitely be back for more nature exploration!