While we are Brownie group that likes to camp, I will admit that I’ve never actually fully committed to taking the girls out in tents. We’ve done camps in buildings, sleepovers at different establishments and camping at sites where some of the girls chose to sleep in a cabin and some in tents just outside. I think I just worry a lot when the girls tent camp – will they be cold, what if it rains, what is the girls are scared, what about bathrooms, what about keeping everyone fed and happy.

This year my co-leaders and I spent a lot of time taking OAL trainings (both tent and residential). I had all my questions answered and we decided to book a campsite for mid-June at camp Adamac – Rainbow Ridge site. This is a great site for Brownies. It has an indoor kitchen facility, dining and an indoor shelter in case of bad weather. The tents are all in a row with a big field to run in and a nearby comfort station with indoor toilets.

We had planned a Cross Canada themed camp for the girls as we are celebrating the Canada 150th celebration this year. Since we never do anything small at camp we decided that we would complete the entire Cross Canada Challenge – all 6 badges in one weekend.

The girls arrived Friday night FULL of energy. We went over fire drill, buddy system and came together for a campfire before bed. The girls were excited to sleep in tents but 90% of them had never done it before so there was some nervousness as well. 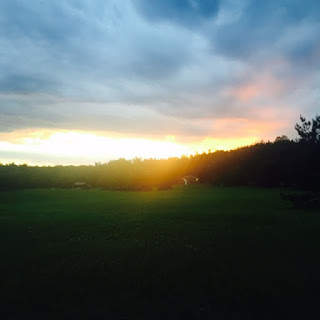 In the morning we discovered that the girls all woke up with the sun (at 4:30am) so we started activities right away. First was a pirate scavenger hunt around Nova Scotia. The girls worked in teams to decipher clues and then going to a Nova Scotia landmark they thought matched. At the end of the treasure hunt the girls dug up a cache of pirate gold swaps that they added to their camp hats.

Next up was breakfast and then patrol duties. This year we taught the girls how to do a proper flag raising – luckily Rainbow Ridge has a flagpole! It always amazes me how much the girls like cleaning toilets and washing dishes. 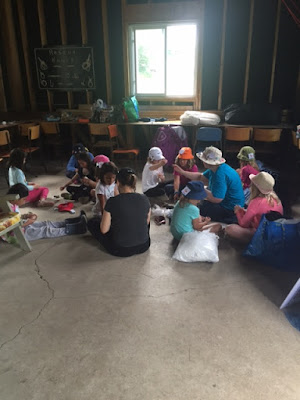 After the patrol duties were done we kept making our way along the Canada tour. We taught the girls a traditional dance from Newfoundland, which we then set to several Great Big Sea tunes. The girls really enjoyed these circle dances – dancing with a partner and then as a whole group. We then moved onto Ontario and PEI creating two more crafts for the girls hats – an Ontario trillium and a PEI Brownie Spud. 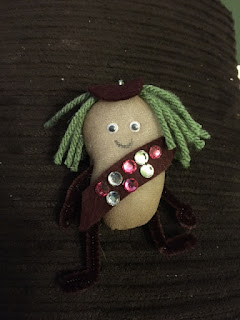 Unfortunately the elements were not on our side this camp. The weather was threatening rain and thunderstorms and the bugs continued to be terrible. No matter we were going to have fun anyways. After the crafts and dancing we decided to get in a hike to the fairy forest. Camp Ademac has my favourite fairy forest complete with a hiking story called the Wiskin’s Way trail. The girls absolutely LOVE doing this hike and we took turns reading the story signs and looking for fairies. Don't you just love the hiking backpacks!


After we got back we had some lunch and celebrated all of our girls with upcoming summer birthdays with a cake. Following cake the girls had some rest time in their tents to relax and recharge. 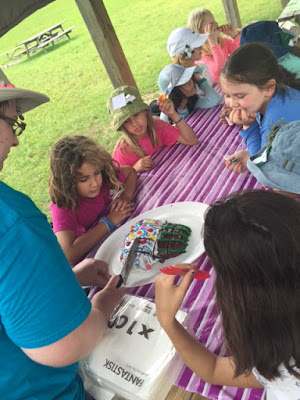 Following lunch we had planned on doing some more active activities but that’s when the sky decided to open and bring out the rain. No matter we all bundled into the rain shelter and worked together to make horses for the upcoming Calgary stampede. Using pool noodles and some other craft supplies the girls all created hobby horses. They were all very unique and once the rain cleared away we decided to have a Calgary stampede barrel race.

Once all the horses were finished the rain still hadn’t cleared – Boo. So we decided to play a game from New Brunswick called Washers! Being from New Brunswick I know this game very well. We have a tournament of Washers every year at my family summer party. The game is pretty simple. Teams of 2 complete, one member of each team is at each box. Two wooden boxes are placed a distance away from each other. The boxes are square and they have a tube in the middle of them. Teams take turns throwing a set of washers towards the other box. If the washer lands next to the box you get 1 point, in the box 2 points and in the tube 3 points. Usually you play until 21 points but with the girls we just played until ten. I was amazed at how into this game the girls were considering the small space and that only one group could play at a time due to space constraints in the shelter. It was a great activity.

FINALLY the skies cleared and the girls were able to go outside. While I ran a t-shirt tye-dye with some of the girls the other leaders were running the Calgary stampede and working on dinner prep. These activities were a great way to spend the late afternoon, super relaxed and fun – the way camp should be. 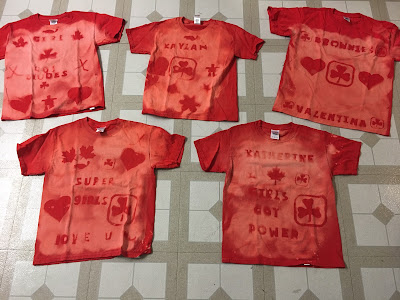 After dinner the weather started to take a turn for the worst. As we were cleaning up many people started showing up in the parking lot, we soon found out other tent sites were evacuating due to the weather. We took a look at the reports and it turned out that there were bad electrical storms coming our way and warnings of tornados passing by as well. We have some girls that are very sensitive to noise- thunder particularly and a few not feeling very well (VERY tired & bug bite riddled). As the weather got worse and worse it became clear that we would unfortunately have to send the girls home early.

The girls weren’t all that happy about going home but they did understand the reasons. I think its important to show the girls that in dangerous weather the best thing to do is to make sure everyone is safe. With a few tents that were leaky and the threat of a possible evacuation at 3am (we would be required to evacuate to the basement of the building on site if the weather reached a certain level which would have been in the early morning) we decided it was best to call parents.

But what to do now? It had briefly stopped raining so one leader supervised the girls packing up all of their stuff and bringing it to the emergency shelter. While they did this our other two leaders rigged up a giant white tarp in the shelter and with the laptop and projector I happened to have in my car we rigged a Brownie drive in movie theatre! Content with a movie and snacks the girls awaited their parents to pick them up. As the girls enjoyed the film us leaders were running around the site pulling down tents and securing things from the wind. Our brownie parents were so understanding. They were really happy that we called them for pick up rather then try and stick it out with unhappy, sick girls.


The leaders and their girls ended up staying overnight and witnessed a WICKED electrical storm. It was SO LOUD in that emergency shelter and the flashes of light were intense. While we probably could have squished all 20 of us in the tiny building it was probably for the best that the girls were picked up.

This camp definitely had its challenges. The bugs were TERRIBLE - all the kids went home looking like they had chicken pox (despite being doused in bug spray).  Cruddy weather: rain, thunder, lightening added to the difficult situation. These conditions, in addition to their excitement about camp led to a sleepless night for many of the girls which made it hard.

However, despite all this we had great spirits and a fantastic time. All the girls said that they had fun and that they would come to camp again! I feel like this experience showed me that even when things don’t go as planned the event can still be fun. I think all my worries about tent camping with Brownies proved to have some truth to them. That said I’m still so, so glad that we took the girls. I now know that the girls can have a great time, no matter what happens and can definitely handle anything that comes their way. Brownies going tent camping – Yes We Can! 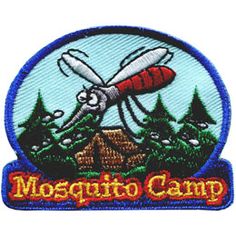 P.S. We got these for the girls and mailed them out after camp. Certinatly was a "Mosquito Camp" If ever I saw one. The girls earned It!
Posted by rcsadler at 17:28