Fun in the Jungle Sleepover!

My girls LOVE spending time together. So much so that when our meetings end at 8:00pm the girls beg their parents to stay longer and no one ends up leaving until at least 8:30pm. When I suggested having a sleepover so they could be together for longer, the girls jumped at the chance. As a result we planned a "Fun in the Jungle" themed sleepover for the end of the March Break holiday. 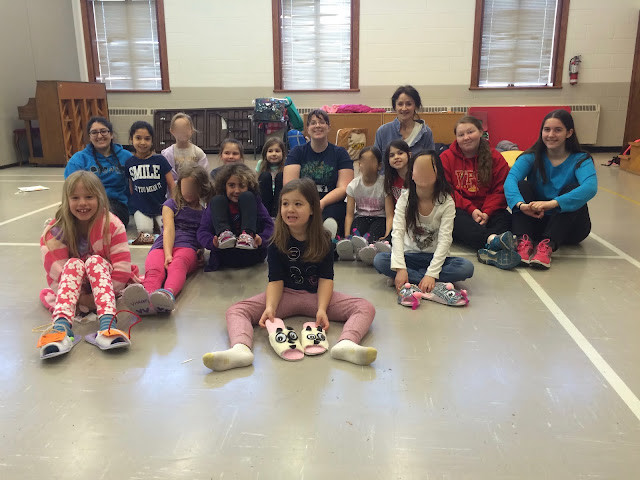 Three girls from our local Ranger unit were interested in planning this sleepover for us as part of their programming which was just great. I took care of the crafts and food while they ran all of the games and activities with the girls. The Brownies worked on two interest badges, learned some great new skills for spring camp and had a TON of fun!

Although everyone was excited, some girls were a bit nervous about sleeping over. For some this was their very first sleepover ever, while others had only slept over at family members homes before. We thought a good way to ease into the activities was with a craft so as soon as each girl arrived they were handed a pair of slippers. What would they do with this you ask? Why make Critter Slippers of course!

With slippers and a table full of craft supplies the girls created all sorts of different animals. The girls made pandas, zebras, cats, monsters, owls and cheetahs! They were so proud of their creations and many of them didn't take off their slippers until bedtime.

After crafts it was time to get the girls up and moving! The Rangers planned all sorts of Jungle themed activities and started out with Tiger Tag and Endangered Animal Skits.

In "Tiger Tag" each girl is given a long orange ribbon to be her tiger tail. This ribbon is placed in the back of their pants and hangs out behind each girl. During the game each girls runs around and tries to snag the tail off of another person. Once you lose your tail you sit down and cheer on the other girls. The winner is the last girl left standing holding all of the tails. This game was very simple but SUPER popular. The Brownies not only played it several times that night but again the next morning.

After the game the girls moved onto badge work. At the sleepover we were working on completing two interest badges: "I Can Be" from the key to the arts and "Saving Plants and Animals" from the key to the living world. The girls worked together to create skits highlighting the dangers of habitat destruction and why animals are becoming endangered.

Next up was a food craft - making tropical flower cupcakes. Using cut up marshmallows and coloured sugar the girls were able to make these beautiful cupcakes that also doubled as an evening snack.
After snack was setting up tents, getting into PJs and having our campfire. The girls loved that the Rangers were there to teach them about tents and really enjoyed singing with such a large group at campfire. After campfire there was some flashlight fun in tents and then off to bed. It took a little while for everyone to settle and fall asleep, but I am happy to report that every girl made it through the night and no one went home!

The next morning the girls enjoyed a big breakfast and learned how to wash their dishes with the three bin method. After that tents were taken down, belongings packed up and after a final few quick games (animal charades) and crafts (monkey finger puppets) all the girls were picked up. 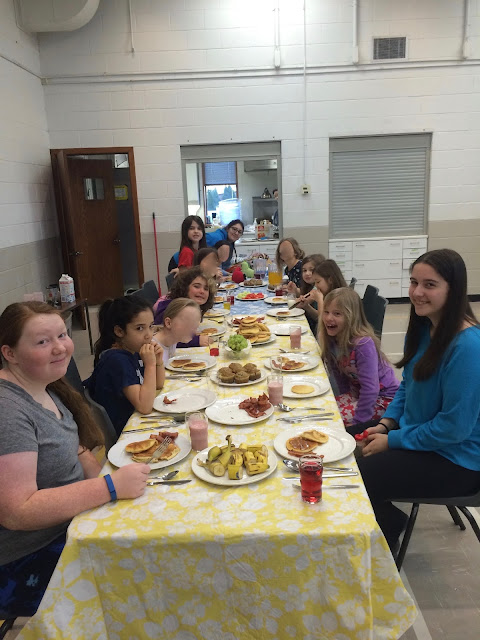 My Brownies had a fantastic time and according to their parents can't wait for Spring camp. Now its time for Brown Owl to go catch up on some sleep!