Every year we finish up our Brownies meetings for the year around the second week of December. The winter season is so, so busy with family events, school concerts and preparing for a variety of holiday celebrations. 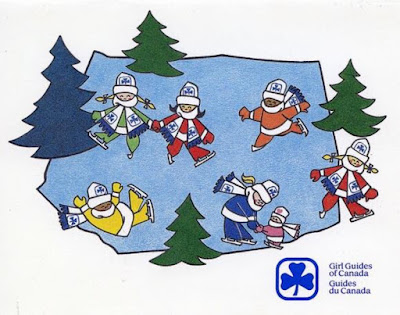 Last year we tried something different. Instead of having a party just for the girls we decided to have a parent/child event where our families could come in and see just what Brownies is all about. We also took this oppertunity to rifle through the craft cupboard and see what we could make and do for limited purchasing. We've been talking to the girls about the importance of buying only what we need, but more importantly using what we already have.

We started off the meeting with our opening song. The girls loved sharing with their parents everything they had learned so far about their opening, fairy song and circles. After that we split into patrols and had everyone start at one of three different stations.

This year we had several stations for the girl's and their parents to enjoy. The first was making some sweet treats - snow-flower cupcakes. This awesome idea was shared with me by my guider friend Nikki. If you cut marshmallows diagonally and stick the stick side in coloured sprinkle-sugar you are able to create a marshmallow petal. If you slowly work these around the edge of a frosted cupcake in circles you get rows and rows of petals which eventually look like a marshmallow flowers. We specifically used blue, white, purple and pink sugar to give the cupcakes a winter/frozen feel to them. 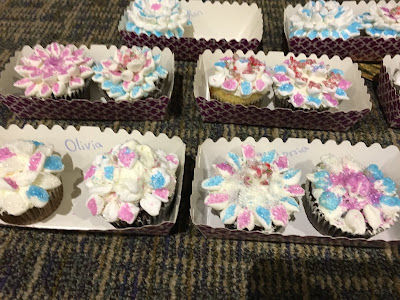 The second station that was set up was building winter houses. I was gifted these amazing winter felt kits from another guider last summer (Thanks Michelle Gilcrest!) and I knew we just ahd to use them at the holiday party. My girls LOVE using the glue guns so I know it was going to be a hit. 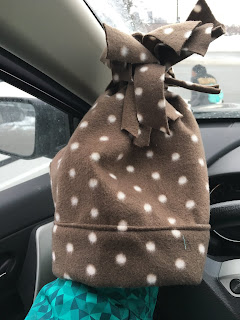 The last station was where the girls created fleece winter hats and scarves to donate to our local women's shelter. A HUGE thanks to snowy owl who prepped all of these in advance so the girls could easily cut, tie and put together without doing too much sewing. In the end of an hour the girls created 15 hats and 20 scarves to donate. I took them over to the shelter later that week and in January we received a lovely letter thanking the unit for their efforts. The hats and scarves were given out around the Christmas holiday and all were well received.

We finished off the party with a few songs and our group closing. What a wonderful way to finish off the fall guiding term.
Posted by rcsadler at 12:26